Nick Price Creatives were contacted by Ferguson's restaurant in Rugby at the end of November and we met Elaine at Ferguson's on 26th November. The venue was great however, Nick Price Creatives had identified that not many people knew where Ferguson's was or, indeed, how good it was. Ferguson's restaurant had been listed in the Michelin guide for 2016 (the only one in the Rugby area), yet apart from a small stickered sign on one of the doors, there wasn't much else to promote this great feat. There was certainly no mention on the Website or Facebook page.

Nick Price Creatives clearly went through a number of measures to improve the exposure of Ferguson's - from improvements to the website (it wasn't Mobile friendly, particularly good in search engines and it had spelling mistakes - 'restaurant' being one on the index page), to Facebook advertising (saying what we could do to target people better), mailing the current database, consolidating all the social media (Ferguson's Twitter account was more a personal account than business). NPC said a competition would be good early in the new year - to win a meal with wine, something really special, to add exposure in January. We proposed all of this via email to "Essentially, Nick Price Creatives would consolidate all your marketing together to ensure it looks better and works better, increasing the numbers of likers, followers, visitors, commentors, reviewers etc - ultimately though more bums on seats in your restaurant." During the initial meeting we also met the restaurant chef and namesake David Ferguson too.

It was all happening pretty quick from the initial phonecall and meeting with Elaine as she was 'jetting off' for a couple of months from the Sunday - so the full report, full of ideas and initiatives was completed and presented on the Friday, so that the restaurant owner Stephen Barnard could respond - he did so on 27th November with great comments such as "I am most impressed with and agree with much of the comment in Nick’s proposal." and "Accordingly, I am willing to cancel programmes that are currently invested in by Ferguson’s for the purposes of Marketing and to take a punt in this direction for a three month trial period, with options to extend then for a further nine months."

28th November we confirmed all the current stats so we knew where to build from with Facebook being the key target the figures were: 852 Likes, 621 had been with 4.7 of 5 stars from 45 reviews. Firstly, we redesigned the look of the Fergusons Facebook page - adding a festive feel and, of course, the Michelin award - plus the TripAdvisor logo. Tripadvisor was performing quite well with consistent high ratings, however no-one was being informed of the reviews - so it made good sense to post these reviews on Facebook too. Prior to December 2015, the 'average' post reached 300 people. November 30th saw a post about new curtains (348 reached), a Facebook review share (252 reached) and the New Years Eve event post (only) 306. Nick Price Creatives first post (we later back-dated some) was the profile pictures which achieved a reach of 369. NPC designed a mock-up Christmas Menu which, through our promotion, reached a new high of 737. Subsequent Tripadvisor reviews - December 15th shown below with the new header 'You Said' achieved 873 and December 17th saw another new high of 869 - it was all moving in the right direction. 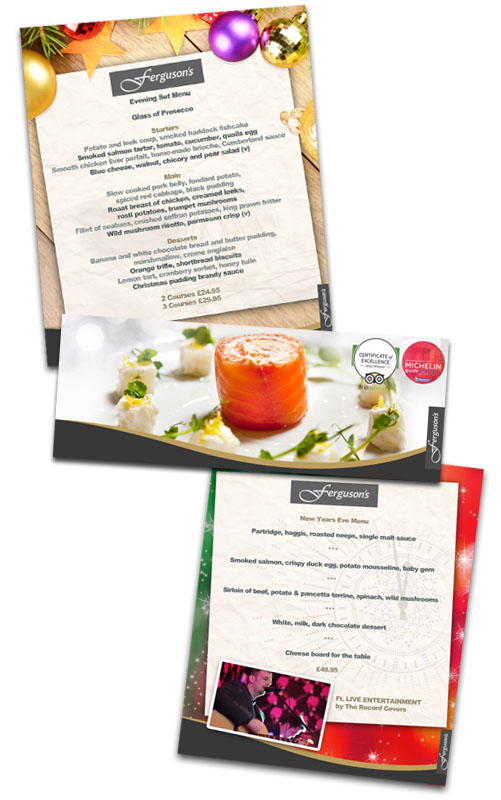 By January 1st the Facebook likes had increased to 892. January 2nd this latest TripAdvisor review posted on Facebook, ""I was slightly concerned that my jaded post Christmas appetite would struggle but the sea bream was so delicious I cleared my plate and my tastebuds having been rejuvenated I even managed Christmas pudding! Totally recommended for great food and lovely service." Jane W, Yelvertoft via Tripadvisor." Achieved a reach of 977.

Each time the increase of 'reach' was achieved without paying (Facebook Boosting) so the potential was there. We had recommended boosting the posts in our initial proposal - imagine what a competition/prize draw for a Meal for two, boosted on Ferguson's Facebook page could do?!
Restaurant Rugby